When All Hallow’s Eve approaches and the rustling of leaves is the soundtrack to long, cool evenings, Boston inspires tales of ghosts and witches. With our city’s rich and sometimes ‘haunted’ history and our country’s oldest graveyards to explore, a Boston Halloween is unlike any other. 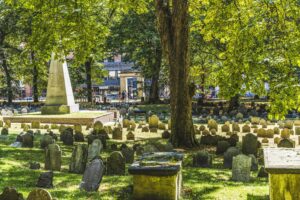 Nothing captures the spirit of Halloween events in Boston like visiting some of our historic gravesites, which date back to the 1600s. Two of these graveyards are along the Freedom Trail, which starts just a short stroll from our front doors.

Just behind Boston Common at 95 Tremont St. is the Granary Burying Ground, named for the grain storage building that used to stand next door. Established in 1660, it is home to 2300 grave markers, but it is believed that up to 5,000 people are buried here. One of the original Puritan cemeteries, it has the gravesites of such founders of our country as Paul Revere and Samuel Adams.

Continue one block east and you’ll find King’s Chapel Burying Ground, next to King’s Chapel at 58 Tremont Street. Our city’s first cemetery, it is the final resting place of many of our city’s founding residents including Mary Chilton, who was the first woman to step off the Mayflower.

Both graveyards have signs that provide direction to the historic gravesites. If you’re looking for ghost-protection through safety in numbers, a Ghosts and Gravestones Tour runs nightly. In addition to visiting these two locations, you’ll hear tales of ghosts that reportedly still visit parts of our city, such as the infamous Captain Kidd, who may still haunt the King’s Chapel Burying Ground.

For a spooky walk of a different kind, visit Beacon Hill. This historic neighborhood, just across the Common, embraces the season like no other. The homes display some of the most extensive Halloween decorations in the city and the cobblestone lanes and narrow streets are the perfect backdrop for a stroll when the ghosts are at their ghoulish best. The streets close down for trick or treating, and the neighborhood is transformed into one of the best Halloween locations in Boston.

If you’re looking to explore a destination synonymous with witches, Salem awaits. Home of the infamous witch trials in the late 1600s, it is filled with historic sites, museums and tours designed to satisfy any Halloween craving. Join a witch city walking tour, a ghost walking tour or explore downtown Salem on your own — if you dare. There are stories awaiting around every corner.

If you don’t have a high-speed broom, then a 45-minute drive will take you to Salem. Or you can hop aboard the ferry from Boston Harbor, which takes you the center of Salem in about 50 minutes.

There is no end of places in our historic city to experience the best of Halloween. Whether you’re craving a graveyard tour, or simply to immerse yourself in the spirit of the celebrations, Boston Park Plaza will put you in the center of it all.

Boston Park Plaza is so much more than a hotel. We are a Boston icon, integral to the city’s heritage. As one of the best hotels in Boston, we offer a true one-of-a-kind experience, as richly textured and profoundly memorable as Boston itself.